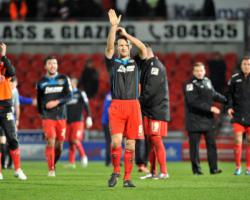 
Westley does not know his place

Stevenage manager Graham Westley has backed his League One side to upset the odds and cause yet another cup upset against Everton this weekend.


Everton and Stevenage are 62 places apart in the league ladder, but Martinez believes Westley's team are favourites to progress to the fifth round.


The bookmakers do not see it that way - but any punter looking for a cup upset this weekend should know that Westley has form when it comes to knocking higher level opposition out of the FA Cup.


The 45-year-old led Stevenage to a 3-1 victory over Newcastle three in 2011 when Boro were in the bottom half of League Two and he also masterminded a win over Championship side Reading the following year.


Earlier this season, Stevenage were only denied a penalty shoot-out against Everton in the Capital One Cup by Marouane Fellaini's extra-time goal at Goodison Park.


Stevenage's league record has not been so impressive this year. Westley's team sit bottom of League Two, but while his players have lacked confidence, that is certainly not an accusation that can be levelled at their manager.


"The boys are in a good mood and nothing would surprise me at the weekend," he said. "We are not thinking about a replay. We know our best chance of beating them will be here.


"We went into the tie against Newcastle struggling in League Two. Not many saw that upset coming but we thought differently then and we are feeling in a similar mindset now."


Martinez is regarded as one of the best up-and-coming managers in the league, but Westley does not feel intimidated by the Spaniard.


"We went to Everton and we got a 1-1 draw over 90 minutes. They beat us just before extra-time, probably undeservedly," Westley said.


"I have a lot of regard for Roberto Martinez, but none of that will mean I go into the match thinking I am a lesser human being or a lesser manager than him.


"I have some great players and our hunger level will be absolute."


Everton midfielder Leon Osman knows the tie is being viewed as a potential FA Cup upset but he believes they are professional enough to avoid a giant-killing.


"That is what is so special about the FA Cup," he said. "People look for giant-killing in each round and I think people will be hoping for one in this round with us.


"We have to go there and be as professional as we usually are, take the game seriously and show our quality on the day.


"Over a number of years we've had a couple of ties that haven't gone our way against teams we were expected to beat but we are hoping we can put a good cup run together, go to teams like Stevenage and come away victorious."


Stevenage winger Filipe Morais is expected to recover in time after suffering a dead leg in the 1-0 defeat by Notts County last weekend.


However, midfielder Dean Parrett is a major doubt as he continues to recover from the knee injury which has kept him out of the last two matches.


Boro have trimmed their squad this week by letting defender Ben Chorley join Portsmouth while striker Marcus Haber and and full-back David Gray are on the transfer list.


Everton full-back Seamus Coleman is ruled out after limping off in the 1-1 draw at West Brom on Monday and his club subsequently confirmed he had sustained a "minor soft tissue injury".